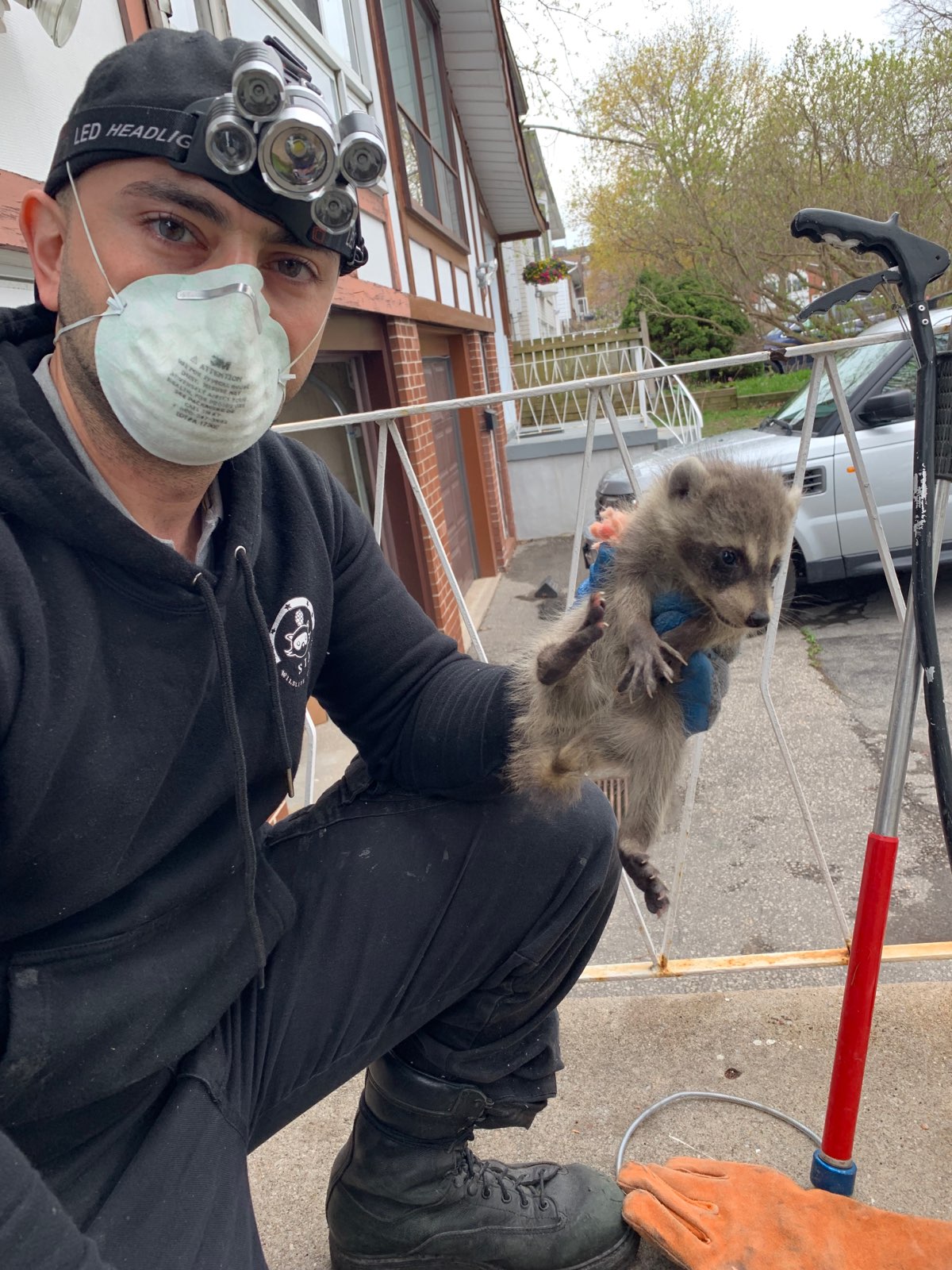 Raccoon baby season started in mid March this year in 2019. Little by little homes started having raccoon entries into the attic in March and increasingly more since. Today we want to clarify what a proper raccoon removal looks like, and our example is Newmarket. Our client called us for help in regards to a raccoon problem. He said that he had been using a company since March to remove a persistent raccoon. Apparently the raccoon kept breaking into his home repeatedly and he couldn’t understand why. Since the raccoon had babies already, she continually ripped off the 1-way door and entered the attic. Workmanship is important, however in this scenario it was helpful in allowing the raccoon reach her babies before they die.

The client told us that the previous company said “it’s too dangerous to enter the attic to remove the babies”. That’s almost the same as a fireman not doing his job because fire is too dangerous. Yes, sometimes it’s impossible to remove babies due to many reasons, but attempts should at least be made. Raccoons will infinitely damage the roof if a one-way door is used while their babies are inside the attic. Unfortunately this resulted in never ending bills for the client before he had enough and called us.

Although Raccoons are generally persistent, they are more so if their babies are taken away from them. If you remove an adult raccoon from the attic, then she will continually assault your home until she reaches her babies. In the worst case scenario? The babies die inside the attic. Between the months of March – July all wildlife control companies should inspect the attic and remove babies.

What should i do in baby season?

If a company attempts to use only 1-way doors without inspecting your attic, you are going to end up with bills and that may be what they want. If an inspection resulted with no evidence of babies, and you haven’t heard chirping you may be able to use a 1-way door. In most cases babies will start chirping once the mother has left. If fast enough, wildlife technicians may be able to return the next morning to remove the babies. But in most cases the raccoon has already damaged the roof and entered the attic again. Thus if babies can’t be found and removed, the best, or if attempted already, last option is to remove the door.

Once we reach mid June-July, babies are typically old enough to use the one-way door. In that time, raccoon removal can be done without the big bills and damages to the roof. Just keep in mind, that prevention is still important as raccoons return frequently.

What did we do to remove the raccoon properly?

When we arrived to the home, the first step was to check the attic for babies. When we entered, luckily we scared the mother off without difficulty. We removed the babies and placed them in an incubator. The client decided to wildlife proof their entire property since they didn’t want to have the raccoons back again. When we finished the prevention, we used a one way door at the entry site and placed the incubator within the mother’s reach. Before we left, we made sure the mother raccoon could hear her babies so we held one close and made her chirp for a little bit. This is helpful in allowing the mother to realize her babies are okay and where they are.

This is especially helpful if the mother has had bad experiences with 1-way doors in the past. We also took extra steps to help guide the mother to the one-way door. 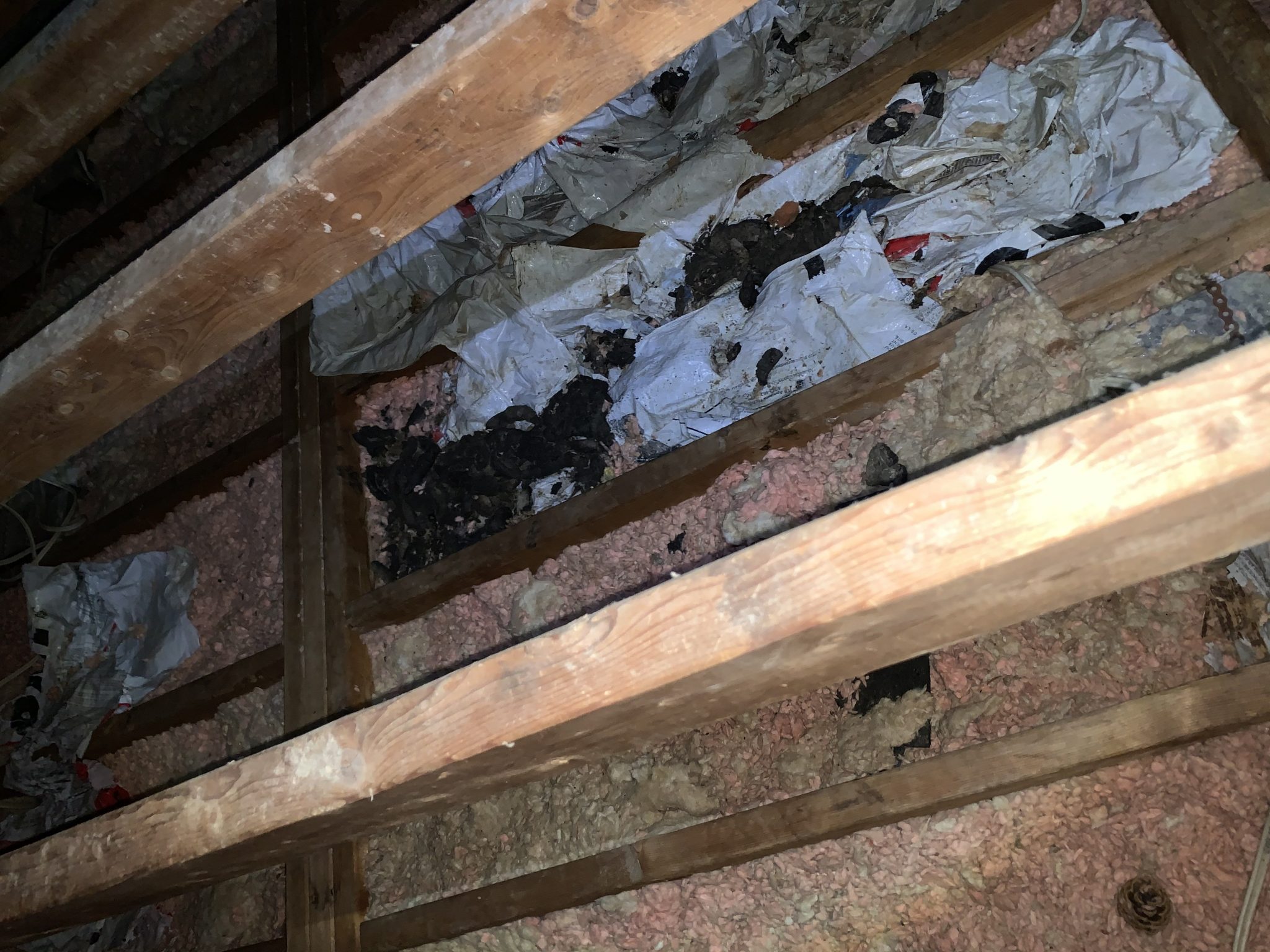 How to get rid of raccoon odor