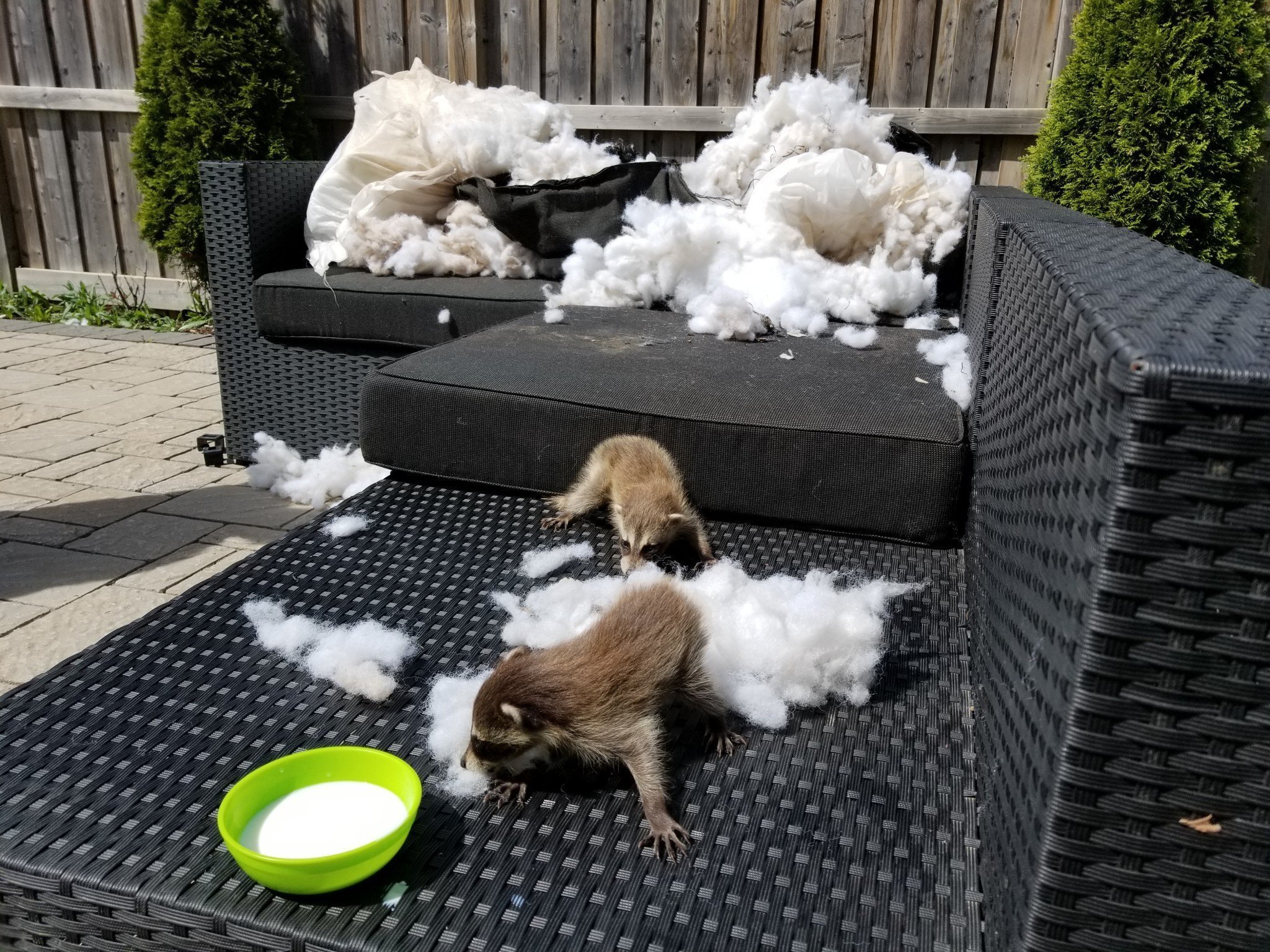 Raccoon activity on the rise

This is the time of the season where people see raccoons doing “weird” things as most of our callers describe to us. It’s the 6 am calls that describe a party with “4 raccoons fighting on the roof of the neighbor’s home and that they are definitely sick”. Raccoons are definitely more active, and it’s not because they are “sick” rather that they are training or hungry. Sure there are sick raccoons out there, but mostly they are either distempered or have rabies. To spot those is not exceedingly difficult.

The active raccoons that you see now are the female raccoons with their babies. Babies were born in March this year and spent 3 months in nurturing. They are in training with their mother on scavenging, climbing, eating and other necessary survival skills. Think of the season as raccoon boot camp days. If you are seeing them during the day time it’s generally because they are hungry. Obviously hunger is a bigger challenge to satiate with a family of raccoons. As a result it is not uncommon to find them during daylight climbing roof’s,  scrambling through trash or laying on top of your deck like a boss.

Raccoons are intelligent animals. As wildlife control technicians we have found that raccoons will vocally express themselves before becoming aggressive. We have been lucky enough to avoid attacks on the field as long as we respect their personal space. Meaning not cornering a raccoon unless you know what are you doing. Therefor a raccoon will keep a good distance away from a sick raccoon. We have always observed sick live raccoons to be solitary. There are three types of sick raccoons that we have run into in the field.

Ever seen panda bears rolling around and stumbling? Raccoons with distemper can look drunk, and resemble the panda bears in the previous statement. Distempered is a result of a nerve virus that attacks the brain and has long affected raccoons. A raccoon will only live for a short time after contracting the virus. They are generally not hostile and are very passive as a drunk person would be hence the nick name.

This virus affects a long list of animals including humans. As long as history goes it’s been around and is a very serious problem. Animals with rabies shouldn’t be approached. If you suspect a raccoon with rabies call the city animal control immediately and get help. Visit an emergency room at the closest hospital if you are bit. Keep in mind you may contract rabies from scratches as well. The virus is transferred through saliva / bite. Animals with rabies portray an aggressive behavior.

The behavior includes aggression to everything including immobile or static objects like trees, bicycles, ground and imaginary objects. You may observe a raccoon biting imaginary flying bugs. Furthermore you may observe saliva excretion or dripping from the mouth. Finally you should know that animals with rabies will portray no sign of fear to humans or other animals.

Unfortunately nature has it’s sad ends. Whether these raccoons died in a battle, hunger or sickness their time has come. The question is how do you protect yourself. Always hire someone else to do the dirty work for you. If you are willing to risk yourself to do the cleaning then you should be well educated on how to protect yourself. There are guides online on how to do so. Use proper personal protective equipment. Gloves, goggles, masks and disposable clothing are a great idea and should be disposed once cleaning is done. Antibacterial household items should be generously used on the areas where the body was removed. Further research is recommended before taking on the job.